Tonights speaker was Julia Viebach, who currently has an exhibition at the Pitt Rivers Museum in Oxford on the Rwandan Genocide of 1994.

Julia Viebach is a researcher in the Centre for Criminology at the Faculty of Law at the University of Oxford.

For the last three years she has been funded by a Leverhulme Trust fellowship and her work has focused on Rwanda, looking at how the country has dealt with the genocide of 1994. Her project “Atrocity’s Archives: The Remnants of Transitional Justice in Rwanda” investigates and compares the legal archival documents of the local Rwandan Gacaca Courts with those of the International Criminal Tribunal for Rwanda (ICTR).

An exhibition of her photos was launched at the Pitt Rivers Museum on Saturday 21st April (until end September). 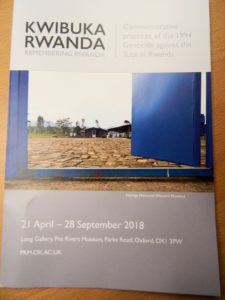 In 1994, and as part of the war in Rwanda, over 1 million people were killed in 100 days. The Tutsi were hacked apart and dumped in latrines or mass graves. Some killed their own family members, others their neighbours. The atrocity destroyed individual and social bonds. Since then, 300 memorial sites have been developed. These include human bodies and bones. Every April there is a mourning memorial period. The Authoritarian regime which is now in control at least has brought peace. 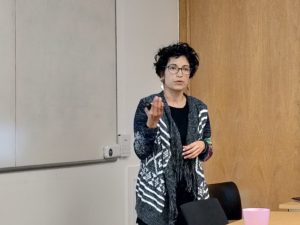 Julia is from Germany, so became aware of the Holocaust issues, and then decided to research the Rwandan Genocide. She is researching the types of memorials and their effect on transitional justice, using interviews, group discussions, observations and testimony. For example, the caretaker of the memorials say it gives them and the dead dignity, and survivors have a twisted view of time (time-reversal).

Her exhibition uses grey (the colour of mourning in Rwanda) and images of their textiles together with photos of memorials and quotes.She aims to educate about what happened there and the dangers of xenophobia,  without shocking the audience.

In the questions and answers section, it was acknowledged that future generations are those who will ask questions of the older generations. It will take time, as the survives feel guilt at surviving, so must forgive themselves before forgiving those who murdered.

President Richie presented Julia with a thank you gift. 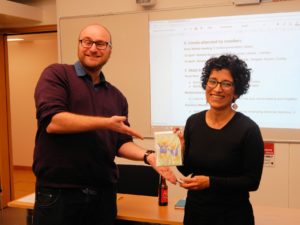