The  Oxfordshire-based mental health charity, Restore, has hosted another wonderful year of its Elder Stubbs Festival at the Elder Stubbs allotment. And once again, members of the Rotary Club of Oxford Spires volunteered their time at the event.

From 9:00am everybody, including Jacques from Oxford Spires, was unloading and setting up all the different stands for members of the public to visit. The theme for this year’s event was “Under the sea” and there were plenty of decoration to match this theme. From blue ribbon flags blowing in the wind, to the magnificent Papier Mâché seahorse that greeted people at the front gate.

Our club members helped out at the different stands, including selling teas and coffee, encouraging people to write positive messages on a large white sheet, selling raffle tickets and finally helping at the Tai Chi and Dance workshop. 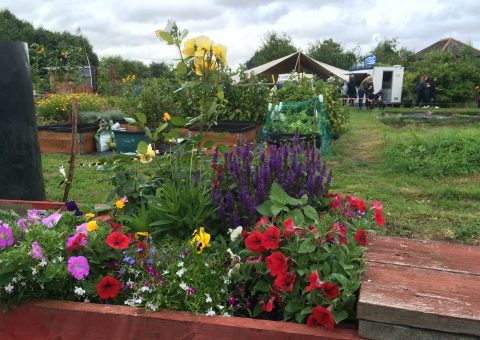 It was a truly fun day all day that not even the odd spot of rain could wash away. Thank you Restore for giving us the chance to volunteer with you and we look forward to helping out more in the future. 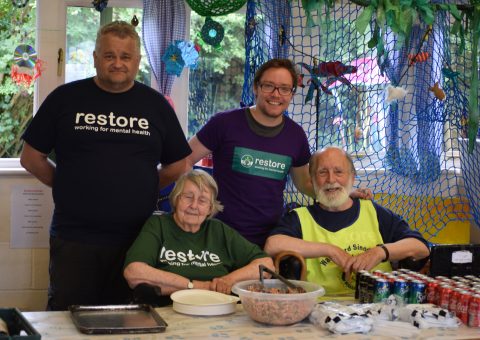 Below are what some of our club members thought about the Elder Stubbs Festival event: 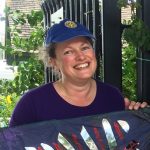 I think the Elder Stubbs music festival is a fantastic annual event I love the combination of flowers and vegetables and music and I find it very inspiring I love that you might walk past rows of potatoes and enormous sunflowers to reach the Oxford food bank store or the Hindu group food store and then on to face painting and jewellery and whether the whether it’s raining or sunny I just walk around the whole place smiling.

I spend some time with two ladies Tina and Vicky who were running workshops for dance and for Tai Chi and they chose to use the one of the restore allotment plots with a little pond in the centre it was lovely to see people walking past hesitant about joining in and then to be able to encourage them to join in and they had a great time taking part in the dance for Tai Chi.

I stare into the face of a sunflower: all my worries disappear and I walk away with a smile on my face. 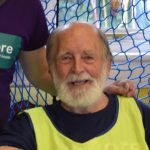 Rachel and I had a good time for four hours on the bean wrap stall.  It was steady work with Rachel serving the salad and me collecting the cash and vouchers. When we left at four I estimate that we served well over 125 including 40 helpers redeeming  vouchers. I had a lovely chat with a few of the other volunteers. Two were psychologists; Michael, a Scotsman who was keen to be briefed on what Rotary was all about (he assumed that we had religious connections undertones). and Philip the co-founder of Restore with Michael Young in 1977. We had Boston in common.  I was to learn from him that  allotments were not named after people but after the elders that were cropped each year to become stubbs. 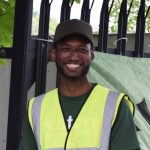 At the heart of the community dwellings, the Elder Stubbs festival is an Oxford event I am very proud to contribute to. This RESTORE charity festival brings together a lot of vibrant energy from the variety of participators and likewise gives me a sense of satisfaction in serving positively the community. The causes and advocacy themes are for most very focused on local realities. As such, this occurrence makes me think it is a great opportunity to meet community members, and discuss randomly around subjects that relates to the community as well as encountering new friendly people. The atmosphere is just so nice and relax, that emotions get high and creativity at its best!

More photos of the Elder Stubbs can be found here.

You can watch the video that Richie Gray made of the 2015 Elder Stubbs Festival video below:

To find out more about Restore visit their website at www.restore.org.uk.