Our guests tonight are two of Rotary’s scholars, Gideon Laux, from Germany, and Chris Chew, from Australia.  Gideon is working on a project to provide access to energy in India and Chris is specialising in infectious diseases.

From Germany, studying for an MSc in Development Economics, hosted by us.

He is from Munich, via Milan (Italy), Tanzania and Kathmandu (Nepal) and is at Somerville College. His project is for India, Energy Access. A quarter million people use kerosene lamps which pollute indoors. Many people have mobiles but have to walk up to two hours a day to a charge point, as there is a lack of electricity in some areas. There is a scheme which rents solar panels, but many cannot afford to rent them. His project is to provide ‘solar ATMs’, where a franchisee has the unit, and charges batteries. 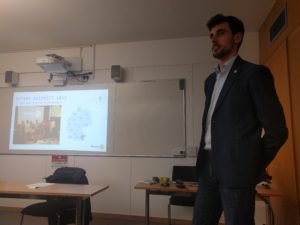 From Australia, studying for an MSc in Global Health Science, hosted by Haddenham & District.

He is specialising in infectious diseases. In Lima, Peru (2006) he noted the income disparity which affects treatment. He has seen the same thing in Australia with the indigenous people. The Australian government have a heavy handed approach, which tells indigenous people where to shop. He is investigating Malaria treatment which is standardised, not based on body weight. 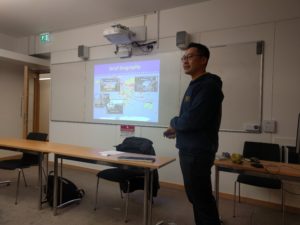