In today’s club meeting our guest speaker was Saeed Ahmed Rid, who wanted to talk to us about his academic research and the book he wrote called “India Pakistan Peace Process – A Strategy for Removing the Deadlock“.

Saeed Ahmad Rid was a Rotary Peace Fellow from 2004-06 at the University of California, Berkeley, USA. He is currently at Oxford University as a Commonwealth Academic Scholar and Visiting Fellow in South Asian Studies, at the School of Interdisciplinary Area Studies. He has also previously studied at Bradford University in the Department of Peace Studies.

His academic research focuses on the India Pakistan peace process and he spoke to the club about his research and the work of Rotary in peace initiatives in his home country of Pakistan.
He thanked us for inviting him, he feels Rotary is family, having been a scholar! He is from Khairpur, Pakistan. He wrote ‘India Pakistan Peace Process – A Strategy for Removing the Deadlock’. 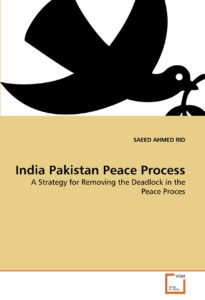 When he returned home, he went to Quaid-i-Azam University. He has been involved with the 7th Wiscomp Workshop in India, the Pakistan India People’s Forum for Peace and Democracy and The Desire for Peace (media groups using artists and musicians to promote peace). He realised that governments cannot make peace happen without working top-downwards and without support bottom-upwards (ie the people need and give encouragement and support). He outlined some of the conflicts between the two countries. He said Rotary can do more – it has connections and networks. Photos of the 4th India Pakistan calendar were shown – this is where schools in both countries provide drawings and quotes from which 6 Indian and 6 Pakistani entries are chosen to create the Peace Calendar.

He showed a video ‘Voice of Ram’ – very moving message for peace and said social media has #Profile for Peace.

Q&A: Phil asked how to get people to talk, Ann asked how much religion is involved. Saeed said that both countries are becoming more religiously intolerant (as are other countries), but the key is to keep communication going. Tim and Karen asked if it is generational, with Partition being 70 years ago, do we wait until the older ones move from power? Saeed said the younger generations learn from their parents and grandparents, so they need to communicate and show the other side’s view.

Saeed said he had looked at Northern Ireland’s process in his research, which confirmed the need for communication and the younger generation to make changes (he cited the 2007 India Pakistan agreement where many minor issues where addressed and agreed on (including Kashmir) by the governments of India and Pakistan, which didn’t happen because their armies wouldn’t agree to the agreement!

Richie gave him a pack of notelets and thanked him for speaking to us.